March 1, 2006 - Disclaimer: Since a lot of people seem to me misunderstanding this article. It isn't about OOP vs. Procedural programming styles. I happen to lean more towards procedural, but could easily have gone more OOP. I simplified the code a bit for brevity, but have added a light OO layer back in the model now. Not that it makes a difference. What I was hoping to get across here is a simple example of how you can use PHP as-is, without additional complex external layers, to apply an MVC approach with clean and simple views and still have all the goodness of fancy Web 2.0 features. If you think I am out to personally offend you and your favourite framework, then you have the wrong idea. I just happen find most of them too complex for my needs and this is a proposed alternative. If you have found a framework that works for you, great.

So you want to build the next fancy Web 2.0 site? You'll need some gear. Most likely in the form of a big complex MVC framework with plenty of layers that abstracts away your database, your HTML, your Javascript and in the end your application itself. If it is a really good framework it will provide a dozen things you'll never need.
I am obviously not a fan of such frameworks. I like stuff I can understand in an instant. Both because it lets me be productive right away and because 6 months from now when I come back to fix something, again I will only need an instant to figure out what is going on. So, here is my current approach to building rich web applications. The main pieces are:

I don't have much of a problem with MVC itself. It's the framework baggage that usually comes along with it that I avoid. Parts of frameworks can be useful as long as you can separate the parts out that you need. As for MVC, if you use it carefully, it can be useful in a web application. Just make sure you avoid the temptation of creating a single monolithic controller. A web application by its very nature is a series of small discrete requests. If you send all of your requests through a single controller on a single machine you have just defeated this very important architecture. Discreteness gives you scalability and modularity. You can break large problems up into a series of very small and modular solutions and you can deploy these across as many servers as you like. You need to tie them together to some extent most likely through some backend datastore, but keep them as separate as possible. This means you want your views and controllers very close to each other and you want to keep your controllers as small as possible.

Goals for this approach 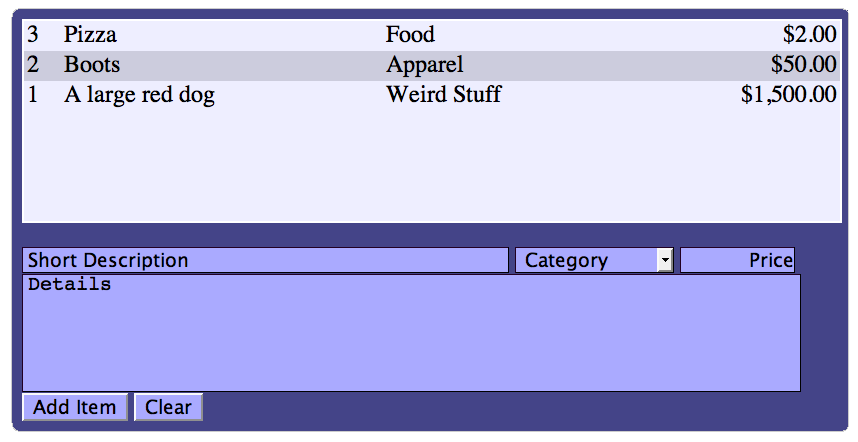 It is a form entry page with a bit of Javascript magic along with an sqlite backend. Click around a bit. Try to add an entry, then modify it. You will see the server->client JSON traffic displayed at the bottom for debug purposes.

This is the code layout. It uses AJAX (with JSON instead of XML over the wire) for data validation. It also uses a couple of components from the Yahoo! user interface library and PHP's PDO mechanism in the model.

The presentation layer is above the line and the business logic below. In this simple example I have just one view, represented by the add.html file. It is actually called add.php on the live server, but I was too lazy to update the diagram and it really doesn't matter. The controller for that view is called add_c.inc. I tend to name files that the user loads directly as something.html or something.php and included files as something.inc. The rest of the files in the presentation layer are common files that all views in my application would share.

A common db.inc file implements the model. I tend to use separate include files for each table in my database. In this case there is a just single table called "items", so I have a single items.inc file.

You will notice a distinct lack of input filtering yet if you try to inject any sort of XSS it won't work. This is because I am using the pecl/filter extension to automagically sanitize all user data for me.

Let's start with the View in add.html:

The main thing to note here is that the majority of this file is very basic HTML. No styles, or javascript and no complicated PHP. It contains only simple presentation-level PHP logic. A modulus operation toggles the colours for the rows of items, and a loop around a heredoc (\<\<\<) block performs variable substitutions. head() and foot() function calls add the common template headers and footers.

If you wanted to make it even cleaner you could use an auto_prepend_file configuration setting which tells PHP to always include a certain file at the top of your script. Then you could take out the include calls and the initial head() function call. I tend to prefer less magic and to control my template dependencies right in my templates with a very clean and simple include structure. Try to avoid using include_once and require_once if possible. You are much better off using a straight include or require call, because the *_once() calls are very slow under an opcode cache. Sometimes there is no way around using these calls, but recognize that each one costs you an extra open() syscall and hash look up.

Here is the UI helper code from ui.inc:

This file just contains the head() and foot() functions that contain mostly plain HTML. I tend to drop out of PHP mode if I have big blocks of HTML with minimal variable substitutions. You could also use heredoc blocks here, as we saw in add.html.

Our Controller is in add_c.inc:

Our controller is going to manipulate the model, so it first includes the model files. The controller then determines whether the request is a POST request, which means a backend request to deal with. (You could do further checks to allow an empty POST to work like a GET, but I am trying to keep the example simple.) The controller also sets the Content-Type to application/json before sending back JSON data. Although this mime-type is not yet official so you might want to use application/x-json instead. As far as the browser is concerned, it doesn't care either way.

The controller then performs the appropriate action in the model according to the specified command. A load_item, for example, ends up calling the load() method in the data model for the items table and sends back a JSON-encoded response to the browser.

The important piece here is that the controller is specific to a particular view. In some cases you may have a controller that can handle multiple very similar views. Often the controller for a view is only a couple of lines and can easily be placed directly at the top of the view file itself.

Next I need to catch these JSON replies, which I do in common.js:

The postForm() and postData() functions demonstrate the genius of the Yahoo user interface libraries: they provide us with single-line functions to do our backend requests. The fN function in the callback object does the bulk of the work, taking the JSON replies generated by our controller and manipulating the DOM in the browser in some way. There are also fade() and unfade() functions that are called on status messages, and on validate errors to produce flashing red field effects.

Note the bottom half of this file where fancyItems() and fancyForm() implement all the client-side magic to animate the forms by attaching handlers to various events. Often you will see server-side business logic nicely separated from the templates, but then there are big blocks of complicated client-side Javascript mixed into the template which in my opinion defeats the clean separation goal. By going through and attaching appropriate mouseover, mouseout, focus, blur and click handlers after the fact I can keep my templates extremely clean and still get a very dynamic experience. Here I am using the event library from the Yahoo! user interface libraries to add the handlers.

Now for the model. First the generic db.inc which applies to all our model components:

I am using sqlite via PDO for this example, so the connect() function is quite simple. The example also uses a fatal error function that provides a helpful backtrace for any fatal database error. The backtrace includes all the arguments passed to the functions along the trace.

The load_list() function uses an interesting trick: it uses APC's apc_fetch() function to fetch an array containing the list of item categories. If the list isn't in shared memory, I read the file from disk and generate the array. I have made it generic by using a variable variable. If you call it with load_list('categories'), it automatically loads categories.txt from the disk and creates a global array called $categories.

Finally, I have the model code for the items table, items.inc:

At the top of each model file, I like to use a comment to record the schema of any associated tables. I then provide a simple class with a couple of methods to manipulate the table: in this case, insert(), modify() and load(). Each function checks the database handle property to avoid reconnecting in case I have multiple calls on each request. You could also handle this directly in your connect() method.

To avoid an extra time syscall, I use $_SERVER["REQUEST_TIME"] to retrieve the request time. I am also using PDO's named parameters mechanism, which is cleaner than trying to use question mark placeholders.

Clean separation of your views, controller logic and backend model logic is easy to do with PHP. Using these ideas, you should be able to build a clean framework aimed specifically at your requirements instead of trying to refactor a much larger and more complex external framework.

Many frameworks may look very appealing at first glance because they seem to reduce web application development to a couple of trivial steps leading to some code generation and often automatic schema detection, but these same shortcuts are likely to be your bottlenecks as well since they achieve this simplicity by sacrifizing flexibility and performance. Nothing is going to build your application for you, no matter what it promises. You are going to have to build it yourself. Instead of starting by fixing the mistakes in some foreign framework and refactoring all the things that don't apply to your environment spend your time building a lean and reusable pattern that fits your requirements directly. In the end I think you will find that your homegrown small framework has saved you time and aggravation and you end up with a better product.