The HTPC box and various computers around the house use a mix of internal drives, external USB and eSATA drives. It is quite a mess, and backups are sporadic at best. The HTPC especially has grown organically with USB and eSATA as it needed more and more space.

So it was finally time for a decent NAS. 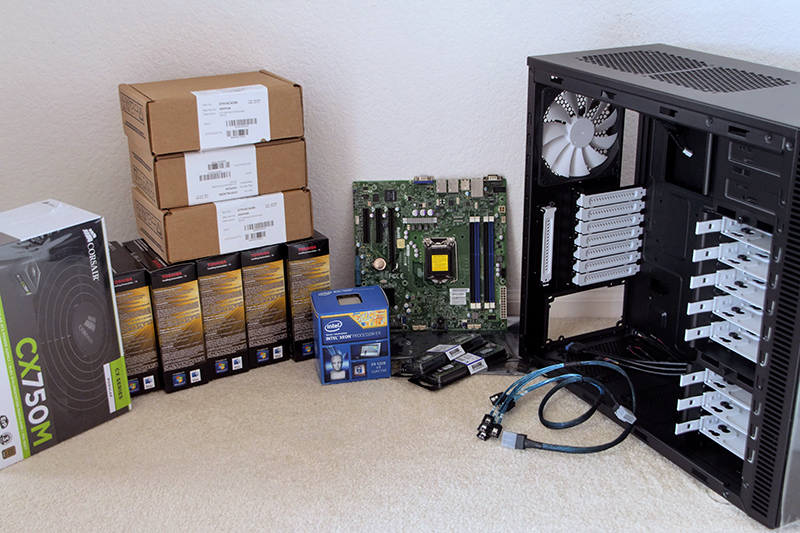 Most of these things were picked up during various deals so you will probably not be able to find the exact items at the prices listed. But Black Friday is coming up, so you should be able to do better! Newegg had a good deal on the drives for $99 each, but they would only let me buy 5. Bought another 3 from Amazon for $105 each. Probably not a bad idea to have drives from 2 different batches anyway. And yes, I know, a windowed case for a NAS box makes no sense. Windowed cases in general make no sense, but I like these Fractal cases with the internal sideways disk trays and the windowed version was on sale.

Carl helped me put the hardware together. 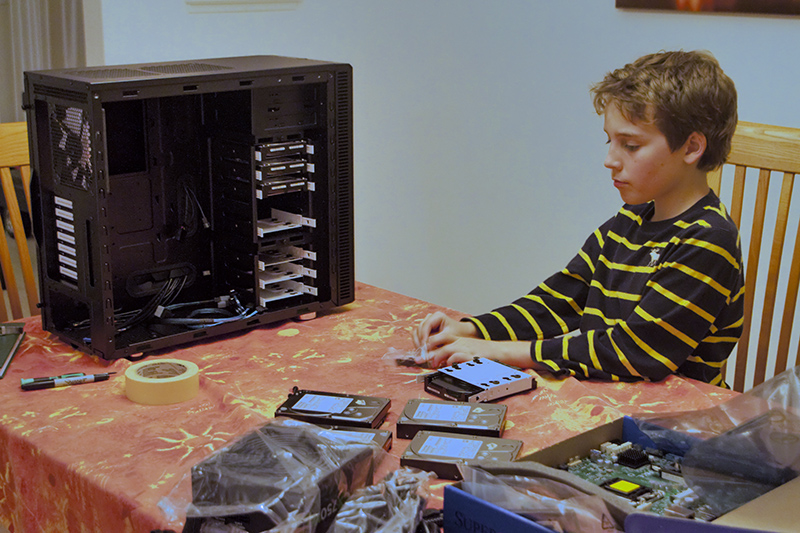 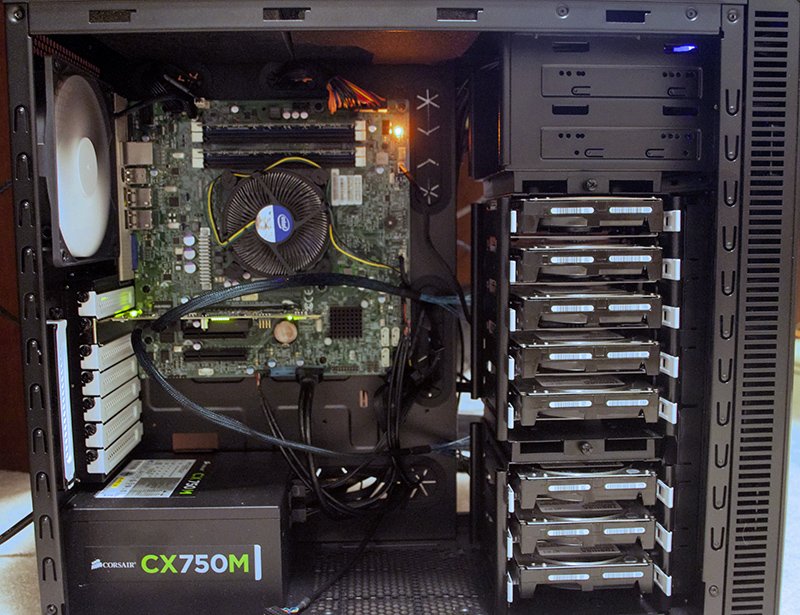 I like how clean things are when you just have those two SAS cables that go to the controller.

I looked at a couple of different options. Rolling my own Linux-ZFS, OpenMediaVault, OpenIndiana, NAS4Free, FreeNAS and a couple of others and ended up using FreeNAS. Having a FreeBSD box back in the household seems right and my initial FreeNAS test was completely smooth.

I cross-flashed the IBM M1015 as per http://www.servethehome.com/ibm-serveraid-m1015-part-4/ to look like an LSI9211-8i in IT mode. This disables any hardware raid and gives the OS direct access to the drives. I had to modify those steps slightly to use the UEFI shell to do it. You can read more about that at http://brycv.com/blog/2012/flashing-it-firmware-to-lsi-sas9211-8i/. Then I dd'ed the FreeNAS 9 image onto a decent USB stick and stuck that stick right into the USB port on the motherboard. I had a slight issue with it not wanting to do a warm-boot from the stick, but that was solved by turning off xHCI in the Bios. That, of course, means no USB3 speeds, but I don't need it for anything. It boots plenty fast from the USB2 stick.

I created a single RaidZ2 16TB ZFS Volume. FreeNAS complained a bit about that not being an optimal configuration, but to keep things simple I prefer just having one single big volume like that. I turned on NFS and rsyncd. Performance-wise I am essentially maxing out the GigE.

I was slightly surprised that I could write to it at > 100MB/s. I had read that RaidZ2 writes were a bit slow. But I guess I hardware-overkilled it into submission.

I also added a dataset specifically for TimeMachine backups and turned on AFP just for that dataset. That worked surprisingly well. The ancient kitchen iMac saw it right away as a valid TimeMachine drive as did my Hackintosh. And of course the Linux-based HTPC and the various Linux servers around the house just speak NFS to it.

I do notice the link getting saturated, especially with 2 TimeMachine backups going and me trying to rsync all the various drives to it all at the same time. It makes me want to go find an LACP-capable switch on EBay and turn on link-aggregation. But having 5 different boxes all writing at the same time is a one-time setup event. In normal use that will never happen, so that would be even more overkill than the hardware this thing already has. I'll update this entry if anything else interesting comes up, but so far it has been a rather uneventful project. A bit boring really when everything just works like that.