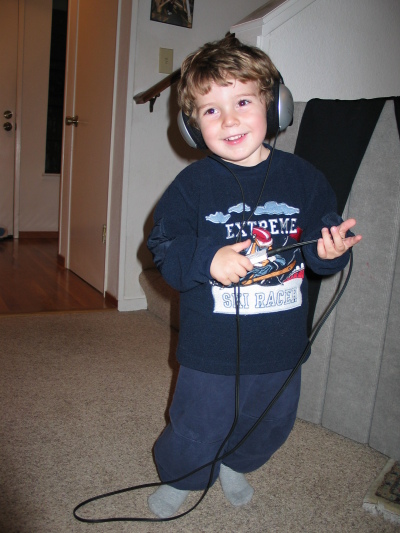 A 1G iShuffle showed up today. Carl instantly took to it and at one point declared, "I like it." So if nothing else, Apple has managed to design something that appeals to a 2-year old.

Much has been written about the lack of a screen on this thing and how it is just a USB memory stick with an earphone plug. While that is pretty much true, it is also priced in the ballpark of dumb memory sticks so I am not sure why people complain so much about that. My main use for an mp3 player is during my runs. I tend to run without my glasses so looking at any sort of display while running is out of the question. I have enough trouble picking out cars without my glasses, never mind a tiny lcd display. When I am stationary I turn to my surgically attached laptop which is a perfectly good mp3 player by itself, but running with a laptop with its hard drive spinning would be insane and as far as I am concerned the same applies to running with a hard drive based player. I have already destroyed one HD player by doing that.

We have two other flash players in the household, both of them with screens, and I never look at them. Flash players are not designed to hold your entire music collection. You have that somewhere else and you just load up stuff you want to listen to for a certain activity. Our other flash players have been stuck in random-play mode for years so it was as if Apple designed a player that catered specifically to the way I use them.

Christine has an iRiver which is a great flash player. But they are a tad pricy, and we already have one of those. No fun buying 2 of the same toys. I also have a rather crappy RAVE-MP AMP-256 flash player I picked up from Walmart for under $50 a while back. It does its job, sort of, but the single AAA battery vs. the AA in the iRiver is annoying, and often it won't start unless I pull the battery and re-insert it. Some sort of firmware bug that they have been promising a fix for. The volume is too low on it and the whole thing feels flimsy, so I am not a huge fan. Then again, for under $50 it's not a bad deal and if they ever come out with that firmware update that fixes the boot and voume problems, and also allowing you to put more than a 512M add-on SD card in it, then it would be a steal at that price. For now I only see myself using it for its radio and voice recording if I can't steal Christine's iRiver which is better at both.

Anyway, back to the iShuffle. There really isn't that much to say about it. You plug it in, iTunes launches automatically (on both OSX and XP) and you either randomly autofill it or you drag songs onto it. Or you do a combination. The volume is good. It weighs nothing. The controls rival the iRiver stick and are easy to operate with one hand unlike the AMP256 which is impossible to control both tracks and voume with one hand unless you have a triple-jointed thumb. One thing that did annoy me was the fact that it doesn't want to connect to 2 different iTunes. I loaded it up on my Powerbook and then plugged it into an XP box to put a few songs on it that was only on that machine and it asked me if I wanted to tie it to this iTunes instead. I understand why this is so from a legal perspective, but given how trivial this restriction is to work around it is one of those things that is just irritating. Also, when I said no it simply wasn't visible, and it isn't showing up as a regular USB mass storage device after that either. If you don't launch iTunes it appears nicely as a usb mass storage device and you can use it like a regular memory stick. I also really like the built-in USB plug and the fact that it recharges through it. The other two flash players in the household can easily go 6 months between music updates because it is a hassle to find the usb cable and hook it up. With the iShuffle recharging and updating the music on it is a single seamless operation. And with Autofill it is just a single click. The other unique feature I haven't seen mentioned much is the option in iTunes to automatically convert to 128kbps AAC for anything you transfer to it to squeeze more tracks onto it.

Perhaps related to that automatic down-conversion feature, it seems like there may be a bug in iTunes. For example right now it is reporting this:

So which is it? Have I used 984M or 782M? I assume there isn't 200M of overhead hiding in there. I get an out-of-space error when trying to add more tracks at this point, yet they still seem to show up and the 782 number goes up while the 984 stays the same. Unplugging it and restarting iTunes doesn't change anything. I did have a number of large .WAV files that I put on there and then converted them to 128kbps AAC once they were already on there. iTunes is telling me they were converted, but it seems like the fact that the file sizes changed on files already on the player isn't being taken into account somewhere.

My final verdict is that this is a cool cheap little player for people like me who can't justify paying $400 for an mp3 player. The iPod mini is definitely an option here for more features and storage, but there is still a hard drive which won't be happy with my vigorous stomping when I run and up in that pricerange there are other options with built-in radios that seem just as appealing. Since I already have two flash players with radios and the ability to record, I didn't really care about these features, but if you aren't a gadget-collecting geek and just want one and don't mind spending a little bit more I would suggest one of the iRiver flash players. Of course you don't get native iTunes integration with a non-iPod which might be a consideration. All in all I am using the shuffle for my runs now in place of the AMP256 because of its higher capacity and seamless charging/updating and because Christine has claimed the iRiver and won't let me steal it.