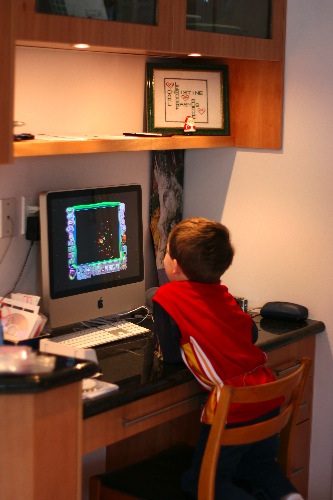 A couple of early Christmas presents for the new house. A new iMac for the kitchen nook and a Sonos system. I guess I haven't bought ram in a while because it was under $100 to upgrade the iMac to 4G with ram from OWC. The iMac is a perfect fit for the kitchen. The black and aluminum matches the counters and appliances in the kitchen nicely. I had been eyeing a Mac Mini for ages, but Apple doesn't seem very interested in the Mini and for the price the iMac seemed like a much better deal. Bought it from Amazon and it didn't come with Leopard but Apple has an update program so the upgrade is mostly free. They want $10 for shipping me the CD. I already have another copy, so it would be nice if they would just give me a serial number.

As nice as the iMac is, the Sonos system is more interesting. I have had various mechanisms for playing music from computers to decent speakers over the years, but they were all inconvenient hacks. I don't want to have to use a computer to control the music, and I definitely don't want to do it via a clunky TV-based interface either. The Sonos with its controller does a great job of taking the hack out of the system. It is basically a wireless meshing modular music system. You put either an amplified box with speakers connected, or an unamplified box connected to an existing stereo in each room and the single controller can then control each zone individually or you can link them all up so all the zones play the same music. Each box also has a Line-In that can be used as a source and played in any other zone

I wanted the iMac to be able to go to sleep without killing the music, so I used a 250G Simpleshare drive I had sitting around. One of these days I need to figure out a real NAS system for the house, but for now 250G is plenty as a Sonos media source. I pointed iTunes at the Simpleshare and copied all the music to the drive, then I pointed the Sonos system at the drive as well and it worked nicely.

Internet radio streaming, Rhapsody and Pandora are all working very nicely. I realize this turned out to be a bit of a boring post since there were no technical hurdles and thus no interesting hacks involved in getting any of this working. But that is afterall why people buy things like iMacs and Sonos systems. If they didn't just work without days of fiddling there are plenty of cheaper options that will let you hack and fiddle for months and in the end you get something that almost sorta mostly works.